Last update June 28th
Spring is blooming and brings a brand new recording! “Subtle Matters” will be released by American label Neuma Records on April, 16th.
It features compositions by Lucia Dlugoszewski, Philip Corner and Tan Dun.
Dlugoszewski, pioneer in experimental musical scene, is the inventor of “timbre piano” and Corner, internationally known as a composer, musician and artist, is co-founder of Fluxus movement. Almost all the pieces are played with extended techniques in the inside of the instrument.
The album will be welcomed on Monday, 29th March by Alley Stoughton’s show “Not Brahms and Liszt” for Cambridge MIT WMBR Radio. You can also listen to the very first track here on Bandcamp.
To know part of the (adventurous) story behind the recording you can read the booklet here (Italian version in pdf here.)
To purchase the album: physical copy on Bandcamp or digital download here (from April, 16th).

REVIEWS:
“If the extended technique is the “canon” of the 21st century, the pianist Agnese Toniutti deserves a place of honor among the performers who have emerged in this twenty years of amazing creative fervor: figures like hers nourish and even inspire the repertoire of the new avant-gardes dedicated to the instrument of the romantic ideal par excellence […].[…] an all-out action on the metal surface of the taut strings, a landscape of vivid tonal and non-tonal polychromy, a playing field and set of profound dramatic tension that Toniutti masters with extraordinary control, offering us […] one of the most meaningful essays of inside piano never heard.”
Michele Palozzo, Percorsi Musicali, June 20th, 2021

“[…] Spooky and entertaining by turn, one’s left curious to see exactly how the work [Dlugoszewski’s Exacerbated Subtlety Concert, ed] is notated, and Toniutti’s intensity and concentration keep us listening. Tan Dun’s C-A-G-E is subtitled a “fingering for piano”, passages where the piano’s strings are strummed hinting at pentatonic folk music. Repeated listenings highlight the work’s ingenuity and beauty, and there’s naturally a focus on the four notes which spell the name of John Cage, a friend and mentor to Tan. Philip Corner’s Toy Piano is ear-tickling, and his A really lovely piece made for & by Agnese showcases her ability to make  the unlikeliest musical material sing.“
Graham Rickson, The Art Desk, May 22nd, 2021

Best of Bandcamp Contemporary Classics – April 2021 “This riveting recital by the Italian pianist Agnese Toniutti brings together the work of three disparate composers, all of which involve exploring the inside of the keyboard. In her liner note essay she writes, “Walking into a new score is like opening a door, having in hand a magic access-key to someone else’s inner universe—their music, first of all, but also a world of feelings, thoughts, decisions and reactions, an individual view of life. That notion is crucial to the opening work, the four-movement “Exacerbated Subtlety Concert (Why Does a Woman Love a Man?)” by the Polish-American Lucia Dlugoszewski, who wrote and recorded the piece using the “timbre piano,” one of many instruments she designed before her death in 2000. Toniutti had to learn the piece through that recording and research various ways to get at the sound, since apart from knowing some of the devices she used (including thimbles, hairpins, jars), there was no specific instruction about the instrument. She transcribed the recording and found her own way forward to create something clearly related to the original, but also her own, rife with alien, evocative textures, resonances, and sonic fractures. She also leaves her own impression on works by Tan Dun and Philip Corner.”
Peter Margasak, Bandcamp Daily, April 29th, 2021

“In a unique CD, the researcher Agnese Toniutti collects the experiments of the last century of musical history – […] “Subtle Matters” is a rare and courageous example of artistic documentation of poetics by authors who have made and are making the history of piano music -and not – of the late twentieth and twenty-first centuries. […] Between sound echoes of Noh theater and Kabuki (Dlugoszewski), arpeggiated and dreamlike piano delicacies (Tan Dun), fragments of wandering and bewitching sounds (Corner), this work is a “unicum” projected into the future“.
Marco Maria Tosolini, Il Gazzettino, April 25th, 2021

“Agnese Toniutti, sonic subversion loves lightness –
In her heretical itinerary she meets today Dlugoszewski, Tan Dun and Corner – Far from academisms “Subtle Matters”, the new album by the pianist from Friuli”
“…if in this album the four of his works [of Corner, ed] stand out for their acumen and a degree of singularity which is rarely remembered the same, it is certainly due to Toniutti’s acumen and singularity. […] In one of Corner’s pieces, Man In Field (the sound as “Hero”) […] the word masterpiece can be written without hesitation. […] Toniutti magical.”
Mario Gamba, Il Manifesto, April 21st, 2021

“[…] a poetic landscape where the key acrobatics are nothing short of stunning.
A very exciting album that nearly redefines how one interprets the piano, Toniutti’s dedication to her art is only proving to be more gripping with each subsequent project, and it be will be interesting to see what happens next.“
Take effect Reviews, April 18th, 2021

“The young pianist, an excellent performer, is here dealing with a repertoire of contemporary music written between 1994 and 2020, ranging from the tribute to John Cage by the Chinese Tan Dun to the dedicated pieces (also for toy piano) by the American Philip Corner, although the surprise remains the initial concert in 4 parts by the Polish-American Lucia Dlugoszewski, an extraordinary artist and inventor of a timbre-piano in which hammers and keys are replaced with strings and plectra. 5/5: Unique.”
Guido Michelone, Alias – Il Manifesto, April 17th, 2021

“A very original cd […] by the talented pianist Agnese Toniutti, which presents a courageous choice of authors out of any commercial homologation: Lucia Dlugoszewski (1925-2000), Tan Dun (1957) and Philip Corner (1933). Sounds and peculiar paths that open not only to musical perspectives but also to existential ones. Congratulations for this choice and for the excellent interpretation that demonstrates how much Agnese Toniutti is convincingly inside this music which is also a different interpretation from the usual repertoire.”
Renzo Cresti, April 10th, 2021

“A wonderful album of modern piano landscapes, all gorgeous and unusual in their own voices. A sonic journey / exploration of dynamic acoustic atmospheres.”
Collin J Rae, March 30th, 2021

“One of those people that doesn’t just play the piano, she plays the piano going beyond just hitting the keys and even bringing toys into the arena. An experimental work that doesn’t feel like it’s just pulled out of the air on a whim, this is less a recital than a journey inhabited by stops and starts, twists and turns. Often becoming head music for cosmic experiences, if you start with Varese and go from there, this might just be the musical comfort food you want on your plate.”
Chris Spector, March 15th, 2021, Midwest Record 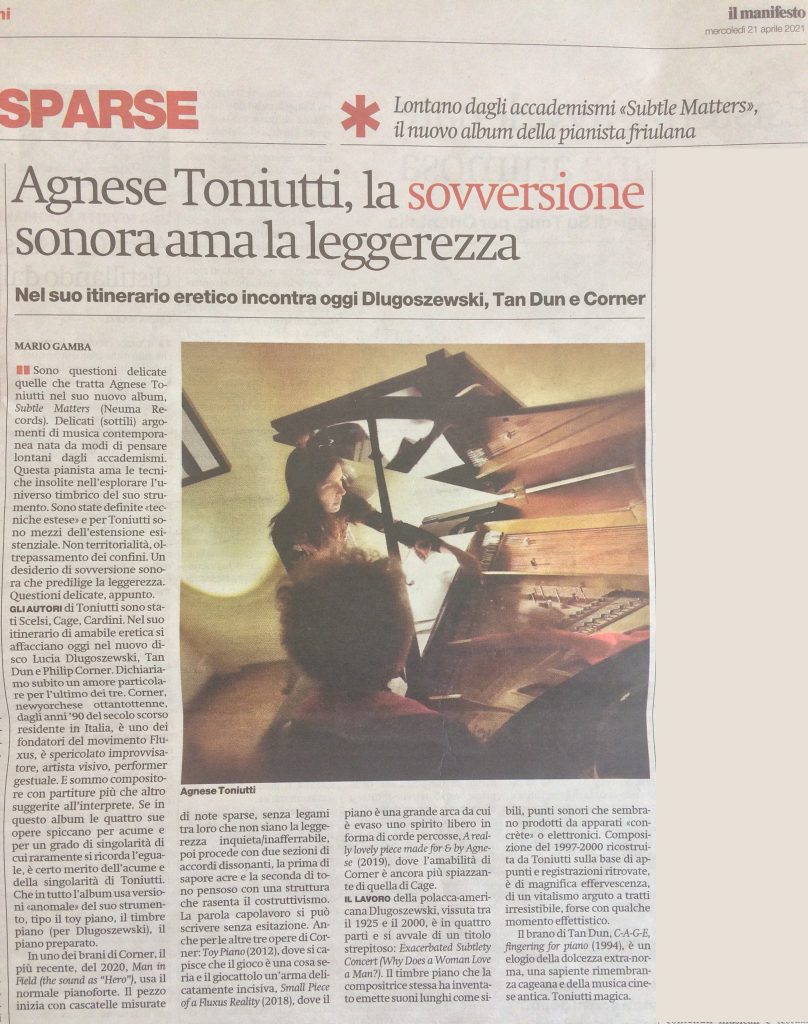 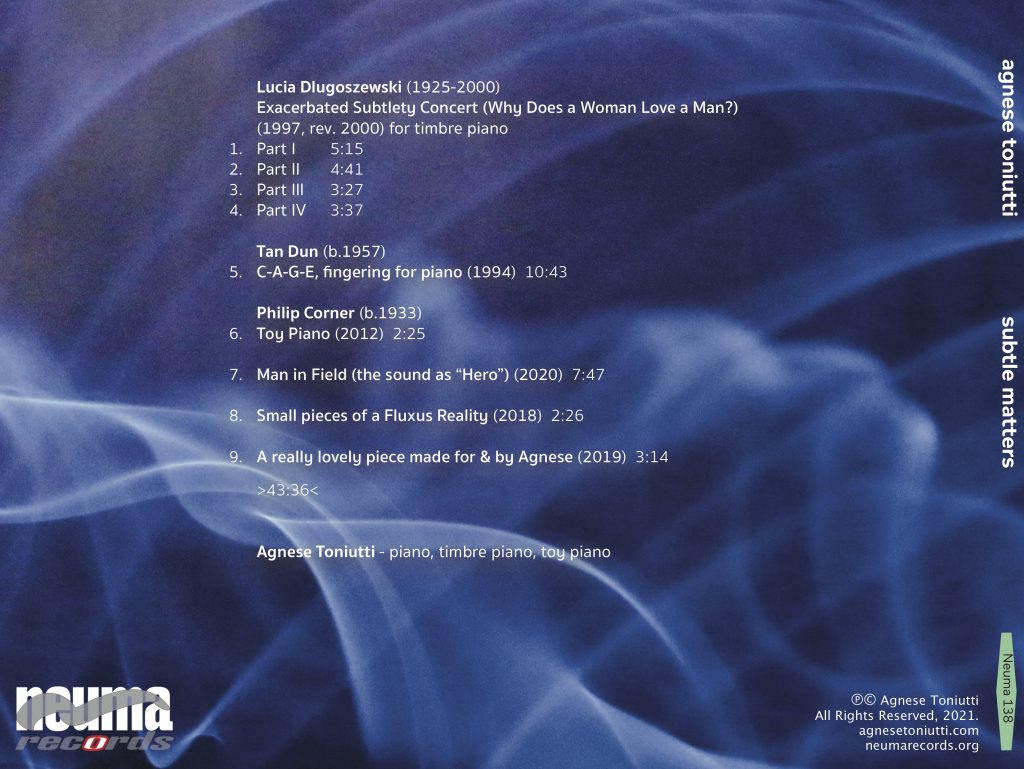